Hardangervidda is a particularly valuable highland area and the largest national park in Norway. The area is important as its the home of the largest wild reindeer herds in Europe and the largest sub populations of many species of birds that are comparatively rare in southern Norway. The plateau has a large diversity of plants in the boundary area between western and eastern species (coastal and inland species). The hundreds of lakes make the plateau an eldorado for hikers with tents and fishing rods. Evidence of how people have utilised the natural resources is prominent on Hardangervidda in the form of paths, tracks, shelters and transhumance summer dairy farms. The hunting and fishing resources are still actively used by people living in the surrounding area. Hardangervidda is an eldorado for hikers with tents and fishing rods. The area is famous for its many lakes and rivers abounding in fine brown trout. There are numerous marked paths and a number of staffed lodges and self-serviced huts. Remember to have your fishing licence. Hardangervidda is a typically highland plateau with extensive, undulating plains. Only in the west the mountains are more dramatic. The hard bedrock in the southeastern part of the national park is the remnants of a more than 1 billion-year-old mountainous landscape. The mountains were eroded and the sea inundated on the low-land plains. The calcareous bedrock in the north-western part of the area formed from sediments deposited on the sea bed 450-600 million years ago. These strata were later overridden by a continuous sheet of rock thrust from the west and both units were pressed together and folded. A new mountainous landscape had risen from the sea. Hårteigen and the mountains around the Hardangerjøkulen ice cap are monadnocks remaining from this mountain chain, which was otherwise eroded down to the basement rocks, particularly during the glacial period. 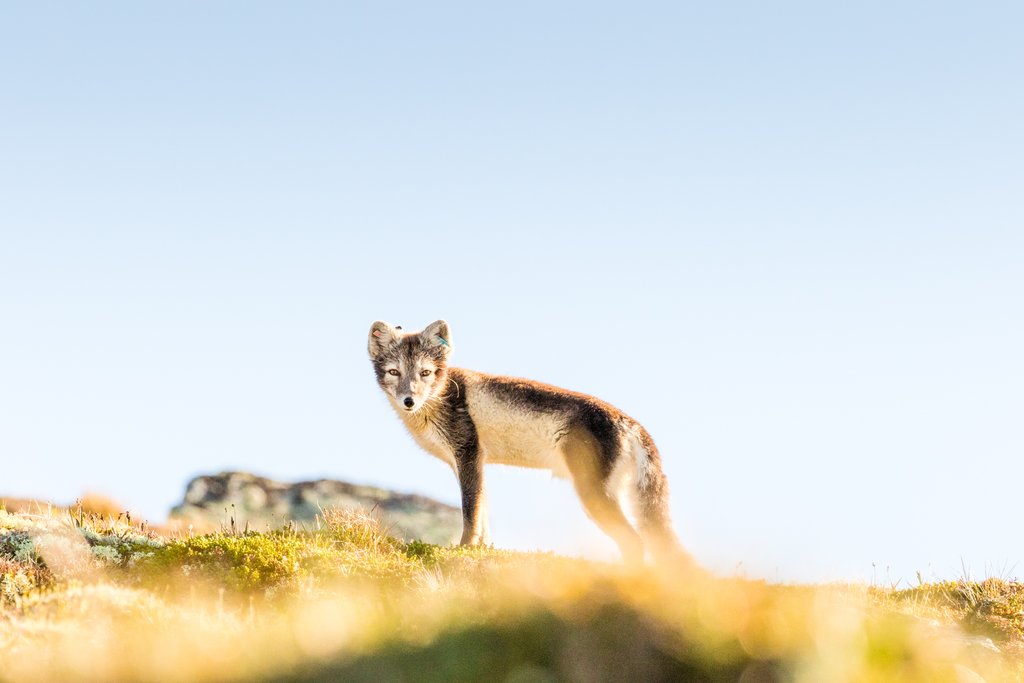 The variations in bedrock and climate mean that the vegetation varies from western to eastern parts of the plateau. Plants grow more vigorously in the west where there is more precipitation and more even temperature. The eastern part is much less lush. Windy heaths are common in areas with little snow and poor bedrock. Hardangervidda became ice free about 9000 years ago. Lichens began to grow on the bare ground, providing food for reindeer. Every spring, the large herds of wild reindeer migrate westwards from their winter grazing on the eastern part of the plateau to where high precipitation and nutrient-rich soils provide good summer grazing with succulent grass for both reindeer and domestic livestock. Early in May, the pregnant females reach their calving grounds in southern and western parts of the plateau. Disturbing them then may prove disastrous. Tee males and juveniles migrate to lower ground and graze in the birch woods. The reindeer need to escape from mosquitoes and warble flies later in the summer, and several thousands may then gather on snowfields on higher ground. After the rutting period in autumn, the animals migrate eastwards again to the windy lichen heaths. The availability of winter grazing limits the size of the reindeer stock on Hardangervidda. The objective of the wild reindeer management is to stabilise the winter population to accommodate it to the grazing resources. The flat landscape with its numerous lakes and wetlands distinguishes Hardangervidda from other mountainous areas in southern Norway. This habitat forms the basis for the largest and most important populations of many kinds of ducks and other wetland species in southern Norway. The breeding populations of black-throated divers, scaups, velvet scoters, common scoters, dotterels, Temmincks stints, great snipes and shore larks are particularly valuable.

People probably came to Hardangervidda at the same time as the reindeer, after the last Ice Age. About 250 Stone Age sites have been found, the oldest dating from 6300 B.C. The people probably led a nomadic life, following the reindeer migration routes. Many of the sites are close to bottlenecks in the landscape, where migrating reindeer herds became compacted to cross lakes and rivers. The early hunters just used bows and arrows, but later they also drove the animals into traps and pitfalls. Botanist have shown that, at times during the Stone Age, Hardangervidda had woodland and scattered trees as high as 1100 - 1200 meters. Finds from excavations of Stone Age sites show that the people hunted reindeer and ptarmigan, elk and trout bones were also found. The old paths crossing the plateau were important routes linking southeast and west Norway. Nordmannslepa, which links Veggli in Numedal with Eidfjord, with branches to Hol and Uvdal, is a particularly well-known path. Shelters used by hunters and fishermen, cattle pens and transhumance summer dairy farms scattered over the plateau take our minds back to the hard times when people had to utilise the resources on Hardangervidda to survive. In our day too, the natural resources on Hardangervidda are very valuable for the surrounding settlements. Hardangervidda National Park differs from other Norwegian national parks because it has been used a great deal by local people, has many buildings and much privately owned land. Consequently, there is a considerable amount of motorised traffic associated with the harvesting of resources, the upkeep of buildings and the running of lodges and huts for hikers and skiers. Large flocks of sheep are taken there to graze each summer, and for many people fishing and hunting are highly valued forms of relaxing recreation and sources of food.

The national park consist of the Hallingskarvet Mountain Range itself, and the highland area west to Østre Låghellerhøgdene, just northeast of Finse. The Hallingskarvet mountain range is a very characteristic landscape element, where several ice ages has implemented characteristic look of the plateau. Hallingskarvet Nasjonal Park was officially opened on the 9th of August 2008. In the Hallingskarvet National Park it is registered areas with valuable and rare species, like the endangered and vulnerable plants of tinderublom and handmarinøkkel. Hallingskarvet is today a integrated living area of one of the largest reindeer herds in Northern Europe. The area also offers good conditions for bird species that live in steep drops and mountainsides. 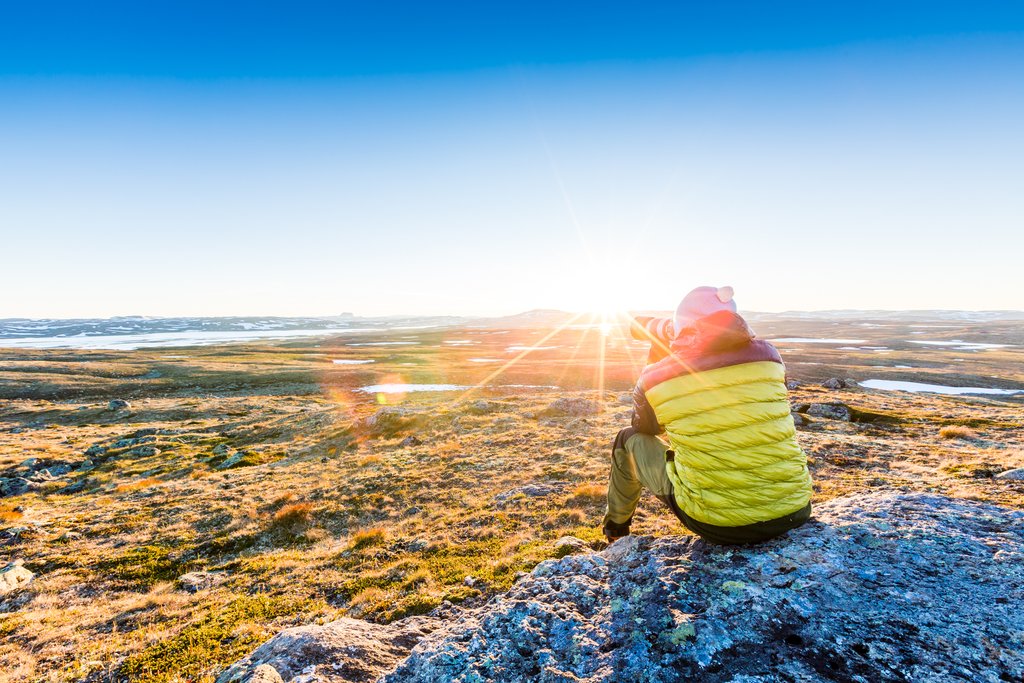 The Hallingskarvet National Park and integrated areas is still actively used, especially within sports and outdoor activities. The annual events of Skarverennet, a ski race starting at Ustaoset and finishing at Finse, and Lordemarsjen, a hike from Raggsteindalen to Haugastøl, is arranged every year in the national park. In the area surrounding the Hallingskarvet, you can find several cultural relics dating all the way back to the Stone Age. You can find traces of former settlements, cattle pens, transhumance summer dairy farms and old paths linking the west and east of the Hallingskarvet Mountain Range together. The cultural relics show that this area used to be, and still is, a great area for hunting and fishing. You are a guest of nature in a national park. Norway's National Parks are regulated by the laws of nature. Nature decides both how and when to do things. National parks are established in order to protect large natural areas - from the coast to the mountains. This is done for the benefit of nature itself, for our sake and for generations to come. The national parks offer a wide range of opportunities and experiences. The natural surroundings are beautiful and varied. There is hunting, fishing, plants, birds, animals and cultural monuments.

To keep it this way, we ask of you to keep this in mind..

-You may go wherever you like, on foot or ski, but the basic rule is that anything with an engine is prohibited. -You can stop wherever you like and pitch a tent. Alway tidy up after yourself and don't leave litter. -You can light a fire, but remember the general ban on lighting fires in forrests from 15th of April - 15th of September. Be considerate when collecting firewood. -You can pick berries, mushrooms and common plants for your own use. Be considerate of cultural relics, vegetation and fauna. Be extra careful during the breeding and nesting season. -Make use of the hunting and fishing opportunities. Remember hunting/fishing licence. Never use live fish as bait, or transfer live fish from one watercourse to another. -You can take your dog with you but remember to keep in on lead from 1st of April - 20th of August.